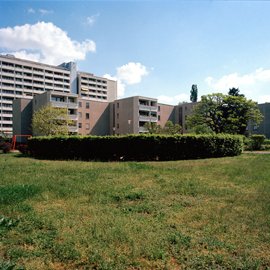 What is the legacy of the holocaust for the third generation? Are we experiencing a time of oblivion, or are there new perspectives on history opening up between Israel and Germany? Journalist and author Hanno Hauenstein discusses with Hadas Tapouchi questions of memory culture and art. The talk will be held in English. The entrance is free.

The lecture will examine Hadas Tapouchi's artistic project in the light of Walter Benjamin's autobiographical text "Berlin Childhood around 1900". In Benjamin's text, recognizing the city's transformations amounts to grasping it as an independent living unit: a homology for a human being.

Dr. Yael Almog is a member of the Center for Literary and Cultural Research Berlin.

Lecture and public discussion of the trappings and symbols of memorial culture in Berlin.

No other city in the world plays host to so many diverse and competing national, political, historical, provincial and international memorials as Germany’s capital. There is a veritable deluge of competing memorial cultures which flood the city’s streets, walls and parks. Almost each decade of the 20th century brought with it new artistic modes to express the contemporary appropriation of historical occurrence and a new generation of politicians and interest groups only too willing to endorse or promote reified retrospection. But what does this mean for the victims or the heroes the monuments are said to honour? More importantly, how does this obsession with what are essentially (Germanocentric?) public acts of contrition and self-representation affect our understanding of history and define our place within the civic space that this historical gaze has bequeathed us? “Transforming” is a challenge to modern awareness of remembrance in general and historical knowledge in particular.

David Heywood-Jones is both a doctoral student at the Philosophy Faculty and a research assistant at the Jewish School of Theology at the University of Potsdam. For some years he has been guiding guests around Berlin and Potsdam. His tours focus on Berlin’s memorial cultures, Jewish Berlin and Prussian Potsdam, and the former concentration camp of Sachsenhausen.

Fifty-five years after the end of the Second World War, the locations of three thousand forced labour camps in Berlin and its immediate environs were researched and documented in 2001. Between 1939 and 1945 prisoners of war and workers from across Europe were concentrated in Berlin and forced to work in what was the seat of Germany’s munitions industry, for many this proved to be a pre-planned death sentence. In some locations there were several camps beside each other, some had only one barracks, others twenty. There were barracks hemmed in behind barbed wire where others functioned as “model” camps, some were concealed, some were in basements, some in bars and shops, apartments and old factories. We can no longer put an exact figure on the amount of camps. By 1945 however, Berlin was where the highest number of forced and slave labour camps were located, even compared to Munich’s 130 and Essen’s 300.

Using an analogue 6x6 camera, Hadas Tapouchi has built on this research to create a photographic topography of the forced labour camps in Berlin, documenting the way their locations transformed and become organic parts of the urban landscape. After World War II most of the camps were destroyed, converted for different usage or rebuilt. They became cafes, schools, galleries, institutional buildings, parks, museums, sport fields or just open abandoned surfaces. In some cases the locations continued to be used by the same companies who had used them during the war.1

The concept behind Transforming is to document a process of urban, social transformation and the manner in which an historical catastrophe can become normalized or neutralized. The objective is to encourage observers to integrate their own historical knowledge into an everyday-oriented perspective and sensibilize them to the process of normalization, where experiences of violence are hidden or ignored and eventually re-absorbed and neutralized in everyday life.

Transforming also advances an alternative approach to the history of the Nazi-Regime. Tapouchi’s photographs are in fact warm, inviting, even discreet and thus stand in contrast to the shocking and ghoulish images known from that period. Everyday life is underlined by the use of colour photography and the occasional inclusion of pedestrians, sometimes even looking at the camera. A subtle naivety goes through the images, reflecting the feeling of security and confidence around normality. The images covey that which is overlooked to the eyes of the viewer - this is the point where history actually happens.

History is at the centre of Tapouchi’s work but not as an abstract goal in itself, rather as an instrument to understand contemporary reality, a reality which re-performs the same narration of violence over and over again. The Transforming photo archive is now online, and can be found at:

1 More research on businesses who made use of slave and forced labour during the war and continued to thrive after the war is needed. A recently-commissioned report by Audi found that its predecessor Auto Union was morally responsible for the deaths of 4,500 slaves who were forced to work in its factories, see the article here:

The exhibition is supported by  the Israeli embassy.